Joel Jover Llenderroso is a Camagüey-resident visual artist who never ceases painting, but now he is making his own path into writing books. Acknowledged by the quality of his work, displayed both in Cuba and abroad, this tireless artist is fine-tuning details of a string of oil paintings entitled “Las 21 Vírgenes”, in which Jover retakes iconographies of virgins and Madonnas, a project in which he once was involved during the 1990’s and even exhibited in New York City some years ago.

In this new proposal, the painter associates the above-mentioned figures with farmyard animals, the sea, the forest and the wood. Besides, one can appreciate paintings in which the virgins carry snakes, deers, lions, eagles, scorpions, frogs, fish or roosters, instead of babies.

Joel Jover’s canvas Eiffel Tower joins other 29 Cuban painters in a travelling exhibit that pays tribute to the 120th anniversary of the Jose Marti’s La Edad de Oro (the Golden Age) magazine, a project that is sponsored by the Sociedad Cultural José Martí and the Visual Arts National Council.

At Amalia art gallery – run by the Cuban Fund of Cultural Assets (FCBC) – this renown artist very recently presented the exhibit “Todo para Vender & Coleccionismo”, made up by small and medium size pieces of decorative art, in a bid to encourage art collecting in this province.

Active member of the National Union of Writers and Artists of Cuba (UNEAC), Joel Jover is a flagship proxy of this organization and a prove of that are the many awards he has captured during his career, such as the Medalla Alejo Carpentier and the Distinción por la Cultura Nacional.

Cuba Denounces Consequences of Tightening of US Blockade (+Photos) 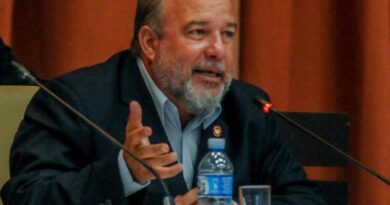