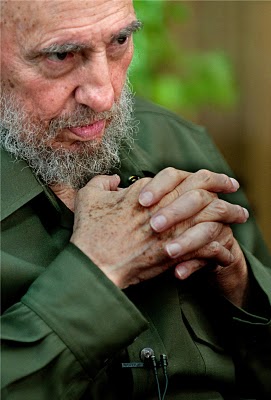 Camagüey, Cuba, Aug 10. – Fidel Castro admitted the important role that the mass media is playing today when a greatest danger is hovering over humankind, which is on the verge of a nuclear war.

Responding to questions and comments by Venezuelan journalists on Sunday, Fidel Castro said that he believes that “we have ideological nuclear weapons on our hands”, referring to the fact that it is essential to spread the reality of what is going to happen. “In the field of transmitting this idea we will be able to win this battle, (…)  this will help to ensure our man [Obama] does not make a mistake”, he noted.

The leader of the Cuban Revolution pointed out that the U.S. Empire has to resign itself now, because it made use and abused of the power of communication, building up the power they have and have tried to preserve it, but they have failed.

Among the topics broached by Fidel Castro in the interview on Sunday with Venezuelan journalists, he highlighted that there is not possibility that Colombia attacks Venezuela, “firstly because they are not interested in; secondly because they can’t; and thirdly because they do not want; and finally because they know that consequences would be disastrous”.

Other topics which are a worry for the humankind today were mentioned by the Commander-in-Chief Fidel Castro Ruz in an interview to journalists Vanessa Davis, Andrés Izarra, Walter Martínez and Mario Silva. (Tay Toscano Jerez / Radio Cadena Agramonte)

Cuban scientists present results of Covid-19 vaccines to WHO

Havana, Sep 17.- Cuban scientists presented details of the results of clinical trials of its Covid-19 vaccines to experts from the World Health Organization (WHO) for the process of international recognition.

Cuban children are vaccinated against Covid-19