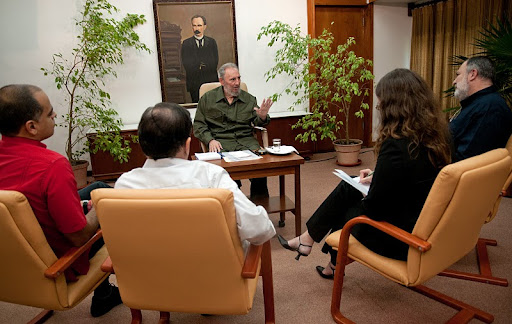 Camagüey, Aug 10. – Revolutionary leader Fidel Castro said that the U.N. cannot stop anybody; (…) everything –in favor of peace- depends on us, as we are capable enough to mobilize as many people as possible in this campaign against the nuclear war, so that Obama can be backed up in his actions, sure of what he is doing is correct.

It is decisive that Obama knows that he would be the person responsible for the lives of millions of people who could die because of a nuclear holocaust, pointed out Fidel Castro. He emphasized that all people; regardless of social class could help Obama understand that, because no one wants to see their families charred, he said.

Journalist Walter Martínez stated that those sectors economically powerful do not want to lose their lives nor fortune, but warned that Israel does everything it pleases and Sharon once said arrogantly that Israel dictated U.S. foreign policy. (Esther Borges Moya/Radio Cadena Agramonte)

Salvadorans Against U.S. Blockade of Cuba