Havana, Dec 30.- The president of Cuba, Miguel Díaz-Canel, praised the work of the island’s scientists involved in obtaining vaccines against Covid-19, newspaper Granma reported today in its digital version.

During his third visit to the Finlay Vaccine Institute (IFV), this Monday, the president was informed about the state of progress of the Sovereign in its variants 01 and 02, in the clinical trial phase.

To the Finlay family, along with the other centers that have worked in the development of Soberana, we express our gratitude for what they have done, and respect and trust in what we are going to continue doing, emphasized Díaz-Canel.

He pointed out that their achievements are proof of the capacities created in the country and the commitment of its scientists to the health of the population.

Vicente Vérez, general director of the IFV and leader of the project, reported that Sovereign 01 advances in Phase 1 and 02 enters Phase 2.

Sovereign 01 has also demonstrated safety and a very good immune response, but it is expected to enter the clinical trial phase in February, due to the time required between one dose and another, he said.

It also ratified the country’s capacity to immunize the Cuban population against the SARS CoV-2 virus in the first half of 2021. (Prensa Latina) 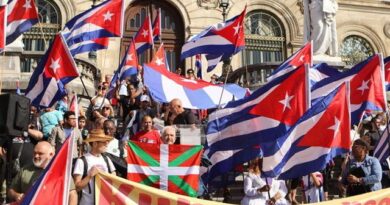 [:es]Symposium in Cuba Focuses on Water as Therapeutic Agent[:]