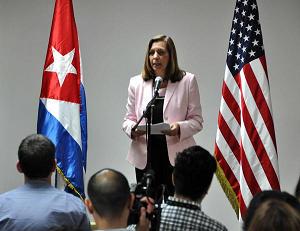 On January 21, 2015, a new round of migration talks was held between US and Cuban delegations, which were headed by Edward Alex Lee, Deputy Assistant Secretary of State for Western Hemisphere Affairs, and Josefina Vidal Ferreiro, Director-General of the US Division at the Ministry of Foreign Affairs, respectively.

During the meeting, which was held amidst a constructive environment, different aspects related to the migration relations were evaluated, including the compliance with the accords in force, the issuance of visas for immigrants and temporary visits, as well as the results of the actions carried out by both parties to combat illegal migration, human smuggling and document fraud. The Cuban delegation expressed its satisfaction over the recent celebration of a technical meeting between the US Coast Guard Service and Cuba’s Border Patrol Guard with the purpose of discussing measures aimed at a more efficient implementation of the Migration Accords and the Search and Rescue Procedures adopted by both countries.

In view of the continued implementation of the “wet foot/dry foot” policy and of the Cuban Adjustment Act, the Cuban delegation reiterated its concern about the validity of these policies, which are contrary to the letter and the spirit of the Migration Accords and continue to be the main encouragement to illegal migration, alien smuggling and the irregular entry into the US territory from third countries of Cuban citizens who have traveled abroad by legal means.

The Cuban representatives ratified their deep concern about the situation faced by the Cuban Interests Section in Washington, particularly its Consular Office, which, as a result of the implementation of the blockade, has been deprived from all banking services for almost one year now, which seriously hampers the provision of the consular services that are offered to Cuban citizens residing in the United States as well as to US citizens who are interested in visiting Cuba.

The Cuban delegation reaffirmed its willingness to continue holding these talks.