Saltar al contenido
news
enero 31, 2012 And called for putting an end to violence, Russia on tuesday rejected the existing bargaining on a resolution against syria at the un security council, To the political crisis and to foreign intervention

Moscow, Jan 31. -Russia on Tuesday rejected the existing bargaining on a resolution against Syria at the UN Security Council and called for putting an end to violence, to the political crisis and to foreign intervention."We oppose any barter or bargaining in the approval of a resolution proposed by western and Arab states against Syria and insist on maintaining our principles", Russian Deputy Foreign Minister Guennadi Gatilov told Interfax news agency.

"We also consider unacceptable any foreign military intervention in Syria's internal affairs and the imposition of sanctions or threats to implement them", noted the Russian official.

The resolution presented by western and Arab nations barely differs from that of October 2011 (vetoed by Russia and China); this is why, we can not back it, Gatilov clarified.

On the other hand, Gatilov underlined that the report of the Arab League (AL) mission of observers in Syria, to be presented to the Security Council, contains first-hand information and recognizes Damascus' cooperation with the mission.

The official regretted the AL decision of ending that mission and is hopeful that it is only a temporary measure.

The work of the observers must continue since it could pave the way to reach a political-diplomatic solution to the crisis by establishing dialogue between the Syrian government and the opposition, Gatilov highlighted.

The Security Council will witness on Tuesday the West offensive favoring a "change of regime" in Syria, a move already played on Libya in 2011.

The magnitude of pressure seeking a resolution to open the door to that possibility is visible due to the presence of the heads of the diplomatic missions from the United States, France and Great Britain, three of the five permanent members of the UN Security Council.

Hillary Clinton, Alain Juppé and William Hague will participate this afternoon in a session of the Security Council to champion the draft resolution that demands the resignation of Syrian President Bashar al-Assad. (Prensa Latina) 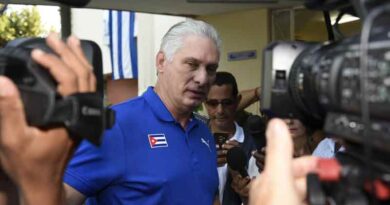 Havana, Sep 26.-  President Miguel Diaz-Canel said on Sunday that Cuba grew up in the process generated by the new