Caracas, Oct 26. -A new financial system is being created in Latin America, Asia and the Middle East which refutes the rumors that his government is giving away oil for free, Venezuelan President Hugo Chavez affirmed.

Speaking on a special television program on Tuesday, Chavez referred to an agreement reached some time ago with Argentina, based on cooperation and mutual respect.

The president noted that the funds resulting from that exchange allowed the country to obtain food, powdered milk, and agricultural vehicles, and to build a tractor factory.

The idea was to create a similar mechanism during his recent international tour of seven countries in Europe, Asia, and Africa, he added.

Some countries cannot pay the world market price for oil, and "that is why we try to reach an understanding with them," Chavez stated, giving the example of Portugal.

"The funds resulting from that exchange will be used to build a modern ferry line, and we will cotinue receiving Portuguese computers, as agreed in the Canaima project with that country," the president sustained.

These are clear, legal agreements that will benefit everybody, so it is important to explain this reality to the Venezuelan people, so they are not misled by the opposition, Chavez said. (Prensa Latina) 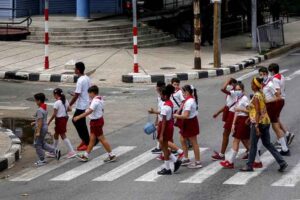 Beijing, Nov 26.- President Miguel Díaz-Canel yesterday confirmed the good state of relations between Cuba and China in each meeting