George Town, May 7. -Cayman Islands and Antigua and Barbuda began to withdraw from the commercial network of 40 US children drugs for pain, colds and allergies, which are deficient in their production process.

Those Caribbean governments also warned parents to immediately suspend the use of Zyrtec, Tylenol, Motrin, Benadryl and other liquid drugs produced in a plant of the transnational McNeil PPC Johnson & Johnson.

The measure was taken after a report issued this week by the US Food and Drug Administration, which reveals flaws in quality control and safety of the plant located in Fort Washington, Pennsylvania.

According to the document, employees at the plant did not receive training on manufacturing practices, or procedures required by the regulations to produce the liquids.

It stresses that McNeil PPC failed to take corrective and preventive measures after receiving 46 consumer complaints between June 2009 and April 2010 about the presence of foreign material and dark spots on the medicines.

It reveals, among other deficiencies, the existence in the industry of raw material contaminated with a type of bacteria not yet identified.

Meanwhile, Johnson & Johnson has temporarily suspended work at the plant, the only company that produces all its drugs for pediatric use. 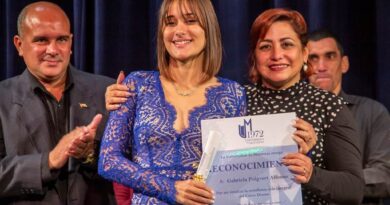 Over 500 Cuban students to graduate from Matanzas University (+Photos)

Revolution from Minorities Needed in the USA, Says Koppel