Brussels, Jul 23.-Spanish lawmaker Javier Moreno called on the European Union (EU) to act against the economic blockade imposed by the United States on Cuba and tightened during the health crisis created by the Covid-19 pandemic caused by the SARS-CoV-2 coronavirus.
‘Amid the Covid-19 pandemic, the EU has to make an effort to end the blockade and Cuba’s suffocation,’ the president of the Cuba Friendship and Solidarity Group during the 9th Legislature of the European Parliament underlined on his Twitter account.

Moreno supported a declaration from the group that denounced Washington’s economic, commercial and financial blockade against Cuba, which he described as a flagrant, mass and systematic violation of human rights.

We, the members of the Cuba Friendship and Solidarity Group, have raised our voices against six-decade-old blockade, which is responsible for incalculable humanitarian damages, he noted.

In the communiqué, the European lawmakers considered that the US measure is the main obstacle to Cuba’s economic development, and warned that it affects dialogue and cooperation, and prevents learning about Cuba’s situation. (Prensa Latina) 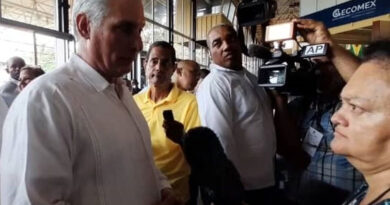 Díaz-Canel reaffirms will for dialogue between Cuba and United States