Saltar al contenido
news
enero 24, 2012 An inmate who was serving sentence for beating out his wife, And not for political issues, But media makes a show only if an ill inmate dies in cuba, Every day, In any country, In the very jails, Inmates die, Not in hospitals, Victims of abuse of all kinds

"Every day, in any country, inmates die, not in hospitals, in the very jails, victims of abuse of all kinds, but media makes a show only if an ill inmate dies in Cuba, an inmate who was serving sentence for beating out his wife and not for political issues.""It’s always the same, looking for the opportunity to defame by making sterile campaigns, because they want to do with Cuba the same they did with Libya, but Cuba is different. If they mess with Cuba, they will se…" said Orlando Miguel Pérez, worker of the EPISUR Industrial Fishing Enterprise, in Santa Cruz del Sur.

Why do Cuban truths bother them? These are real truths and every body can see them, like the help to Haití. Truths that the united states always try to hide, but cant.

The Cuban people, and the citizens from Santa Cruz del Sur as part of it, will continue to build and improve a more just society like Marti wanted. 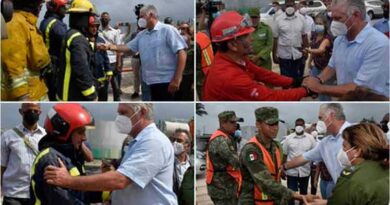 Diaz-Canel extols heroism, solidarity in response to fire in Matanzas