Havana, Sept 13. – The infinite hypocrisy of the West is the title of the most recent reflection by Cuba Revolution leader Fidel Castro.

Prensa Latina is posting below the full text of Fidel Castro's reflection.

The Infinite Hypocrisy of the West

Although several articles on this subject were published before and after September 1st, 2010, on that day the Mexican daily La Jornada published one of great impact entitled El holocausto gitano: ayer y hoy (The gypsiesâ�Ö holocaust: yesterday and today) which reminds us of a truly tragic history. Without adding or deleting a single word from the information contained in the article, I will quote some lines referring to some events that are really touching. Neither the West nor -most of all- its colossal media apparatus have said a single word about them.

"1496: boom of humanist thinking. The Rom peoples (gypsies) from Germany are declared traitors to the Christian nations, spies paid by the Turkish, carriers of the plague, witches and warlocks, bandits and children kidnappers.

"1710: century of Enlightenment and rationale. An edict ordered that adult gypsies from Prague be hanged without any previous trial. Young persons and women were mutilated. In Bohemia their left ear were cut off; in Moravia, their right ear.

"1899: climax of modernity and progress. The police of Bavaria founded the Special Section for Gypsiesâ�Ö Affairs. In 1929, the section was promoted to the category of National Central section and was moved to Munich. In 1937 it was based in Berlin. Four years later, half a million gypsies died in the concentration camps of Central and Eastern Europe."

"In her PhDâ�Ös thesis, Eva Justin (assistant of Dr. Robert Ritter of the Racial Research Section of the Ministry of Health of Germany), asserted that gypsiesâ�Ö blood was extremely harmful to the purity of the German race. Someone called Dr. Portschy sent a memorandum to Hitler suggesting that gypsies should be submitted to forced labor and mass sterilization because they jeopardized the pure blood of the German peasantry.

"The gypsies, who were labeled as inveterate criminals, started to be arrested en masse, and as from 1938 they were put into special blocks at the Buchenwald, Mauthausen, Gusen, Dautmergen, Natzweiler and Flossenburg camps.

"In a concentration camp he owned in Ravensbruck, Heinrich Himmler, chief of the Gestapo (SS), created a space to sacrifice gypsy women who were submitted to medical experiments. One hundred and twenty zingari girls were sterilized. Gypsy women married to non-gypsy men were sterilized at the Dusseldorf-Lierenfeld hospital.

"Thousands of gypsies were deported from Belgium, the Netherlands and France to the Polish concentration camp of Auschwitz. In his memoirs, Rudolf Hoess (commander of Auschwitz) wrote that among the gypsies deported there were old people almost one hundred years of age, pregnant women and a large number of children.

"In Yugoslavia, gypsies and Jews were equally killed in the forest of Jajnice. Farmers still remember the cries of the gypsy children who were taken to the places of execution."

"At the extermination camps, only the love of gypsies for music was at times a source of comfort. In Auschwitz, starving and infested with lice, they gathered together to play music and encouraged children to dance. But the courage of gypsy guerrillas who fought alongside the Polish resistance in the region of Nieswiez was also legendary."

Music was the factor that kept them together and helped them to survive, just as much as religion was for Christians, Jews and Muslims.

The successive articles published by La Jornada as from the end of August have reminded us of events that were almost forgotten about what happened to the gypsies in Europe. After having been affected by Nazism, they were consigned to oblivion after the Nuremberg trials in the years 1945 and 1946.

The German government headed by Konrad Adenauer declared that the extermination of the gypsies before 1943 was a result of the Stateâ�Ös legal policies. Those who had been affected on that same year did not receive any compensation. Robert Ritter, a Nazi expert in the extermination of gypsies, was set free. Thirty nine years later in 1982, when most of the affected persons had already passed away, the government recognized their right to compensation.

More than 75 per cent of the gypsies, whose total number is estimated to be between 12 and 14 million, live in Central and Eastern Europe. Only in Titoâ�Ös socialist Yugoslavia, gypsies were recognized the same rights as the Croatian, Albanian and Macedonian minorities.

The Mexican newspaper described as "particularly perverse" the mass deportation of gypsies to Romania and Bulgaria ordered by the government of Sarkozy -a Jew of Hungarian descent-; these are the exact words used by the newspaper. Please do not take this as an act of irreverence on my part.

In Romania, the number of gypsies is estimated to be two million.

The president of that country, Traian Basescu, a US ally and an illustrious member of NATO, called a woman journalist a "filthy gypsy". As can be observed, this is an extremely delicate person who speaks in a polite language.

The website univision.com posted some comments about the demonstrations against the deportation of gypsies and the "xenophobia" in France. According to AFP, around "130 demonstrations should take place in France as well as in front of the French embassies in several European Union countries, with the support of tens of human rights organizations, trade unions and left wing and ecologist parties". The extensive report refers to the participation of well known cultural personalities such as Jane Birkin and the film-maker Agnes Jaoui and reminded readers that Jane "together with Stephane Hessel, a former member of the resistance against the Nazi occupation of France (1940-1944), was part of the group that later on met with the advisors to the minister of Immigration Eric Besson.

"â��It was a dialogue of the deaf, but it is good that this took place, for it showed that most of the population was enraged at that nauseating policyâ�Ö, said a spokesperson of the network â��Education Without Bordersâ��"

Other news about this thorny issue come from Europe: "Yesterday the European Parliament put France and Nicholas Sarkozy on the spot for having deported thousands of Romanian and Bulgarian gypsies during a tense debate in which the attitudes of José Manuel Durão Barroso and the Commission were described as scandalous and ridiculous for their apparent pusillanimity and for failing to condemn Paris decisions as illegal and contrary to community rights", according to an article by Ricardo Martínez de Rituerto published by El País.com.

La Jornada published in another article impressive social data. Neo-natal mortality among the gypsy population is nine times as much the European average and the life expectancy rate is hardly above 50 years of age.

Before that, on August 29, it had reported that "although there have been plenty of criticisms -from the European Union institutions as well as from the Catholic church, the United Nations and the broad spectrum of pro-immigrants organizations- Sarkozy insists in expelling and deporting hundreds of citizens from Bulgaria and Romania -and therefore, European citizens- using as an excuse the alleged â��criminalâ�Ö character of these citizens."

"It is difficult to believe that in the year 2010 -concludes La Jornada- after the terrible past Europe had with racism and intolerance, it is still possible to criminalize an entire ethnic group by labeling it as a social problem."

"Indifference, or even consent towards the actions carried out by the French police today and the Italian police yesterday -more European, in general terms- leave the most optimist analyst speechless."

Suddenly, while I wrote this Reflection, I remembered that France is the third nuclear power in the planet, and that Sarkozy also had a briefcase with the keys required to launch one of the more than 300 bombs he had. Is there any moral or ethical rational in launching an attack against Iran, a country condemned for its alleged intention of manufacturing this kind of weapon? Where are the good sense and the logic of that policy?

Let us assume that Sarkozy all of a sudden goes crazy, as it seems to be the case. What would the UN Security Council do with Sarkozy and his briefcase?

What will happen if the French extreme right decides to force Sarkozy to maintain a racist policy, opposite to the norms that prevail within the European Community?

Could the UN Security Council respond to those two questions?

The absence of truth and the prevalence of deception is the biggest tragedy in our dangerous nuclear age. 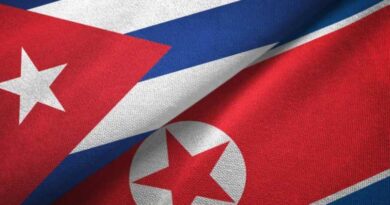