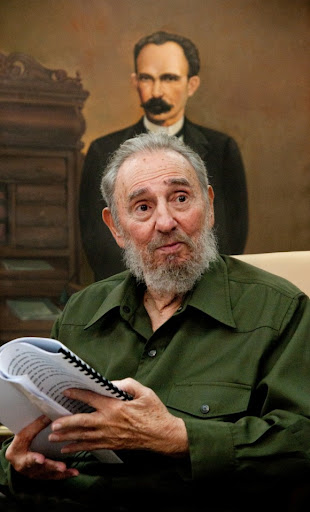 Camagüey, Aug 9 – In an interview marked by a cordial and respectful atmosphere, the leader of the Cuban Revolution Fidel Castro responded to questions by Venezuelan journalists about the threats of a large-scale nuclear war that could begin in the Middle East and stretches across much of the continent of Eurasia.

As a response to the question posed by Vanessa Davis, who asked why Obama would listen to a Latin American leader, Fidel Castro answered that he spoke on Saturday on behalf of Cuba, as a person that has been studying and insisting on the issue.

He added that it is difficult for a leader of a country who is still in office to dedicate his time, as he has dedicated, to think about these matters. This problem has been the top of my priorities, he said.

The Cuban leader noted that, as he explained in his message to Cuba’s National Assembly of People’s Power, these thoughts were initially a little more pessimistic. In spite of everything he though that perhaps there would be some probabilities of survival, mainly in Latin America and the Caribbean which threatened no country.

And pointed out that there is no other region on the planet that shares the conditions of our region, as the least dangerous zone, he added.

US Groups Call Rally in Support of The Cuban Five

Ankara, Sep 28.- Cuban Ambassador to Turkey Luis Amoros highlighted the cultural ties between the two nations after attending the inauguration of La Bodeguita del Medio bar-restaurant in Istanbul, as part of a tribute to that establishment in Havana homage to the renowned Havana premise, diplomatic sources said.