Havana- Thousands of people have enjoyed the two shows that make up the Circuba 2010 international circus festival. It has everything: flexible movements, precision in every gesture.

One beautiful example is the Duo Rose, trapeze artists from the United States.

Another is the young man with two ribbons who also performs this lyrical art, which is very close to classical ballet, except that he "dances" in the air: Cuban Donet Collazo.

Two great artists from Russia have left a trail of applause: hand-balancing acrobat Minasov Maxim (who stands out for the aesthetics of his movements and the entire number, including music) and the very agile juggler Denis Chindyaskin, who surprised the audience with the elegance, novelty and originality of his performance.

Venezuelan Darwin Diaz, juggling with diabolos, leaves the audience stunned with the speed and organization of his stage work, while Mexican Omar Vivas unleashes hilarity from the opening gala, juggling with hats.

He is, undoubtedly, a good candidate for the popularity award at this event, sponsored by the National Circus of Cuba, the National Council for the Performing Arts and Havana Club International, SA.

The clowns have not yet demonstrated their potential in this edition of Circuba, although Cuban clown Pepitin showed off his artistic talents with the fly and cake gag. 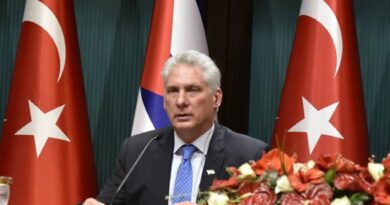 Protests in the US against Banning of Trips to Cuba